Available as CD and Download amongst others at amazon.com, bol.com and iTunes.com.

Apart from the flawless electro-pop-titles THERE IS SOMETHIN’ and BEING BOILED, a hot inventive cover of the Human League-classic with a straight house beat, as well as a wide-ranging track (LOSE MYSELF) dominated by electric guitars and furthermore powered by Kai Eckhardt’s fretless bass [Stanley Clarke, Billy Cobham, John McLaughlin] that could have emanated from a collaboration of The Cure with Japan and Tears for Fears, the long-player sometimes moves in lounge-like realms (THE ABILITY TO CHANGE, A PLACE IN THE CITY), sometimes akin to minimalist-electro (PARANOIA, GENERATOR X.O.7/8), just to present itself on the other hand romantic and soundtrack-like (LET HER GO) or impetuously electro-raving, reminiscent of the Chemical Brothers or Underworld, though more song- and pop-orientated ((WE SHOULDN’T) TAKE A CHANCE). Moreover, you can listen to a whacky & slightly darkwave-like duet (WALKING THROUGH THE RAIN) with Antje Schulz [In strict Confidence, Chandeen, Spin spin Sugar). The CD is rounded off with the previously unreleased bonus video-track PULSING ADRENALINE originating from Javelins last album ‘Broken Surface’ (produced with Harald Löwy [Chandeen]); with its mixture of experimental, ambient, ballad- and jazz-like elements this song enriches the albums extraordinary musical range once more.

Time for Change is a missing link for everyone interested in imaginative and intense music that’s mainly based on synthetic sound generators but still sounds organic, and who appreciates clear singing with a distinctive timbre, which in an imaginary cosmos of voices should be assigned to the zodiac sign of the reflected & controlled but nevertheless strongly emotional loner, somewhere between Gahan, Sylvian, Heppner, Hutchence, le Bon and the early Ferry.

Especially due to the 80’s revival [IAMX, Heaven 17, Duran Duran, Hurts, Wolfsheim, De/Vision, Air etc.], which has lasted for several years now, a younger audience with a taste for exquisite, electronic based pop might develop a strong liking to the music of Ion Javelin as well.

Further information to album and single 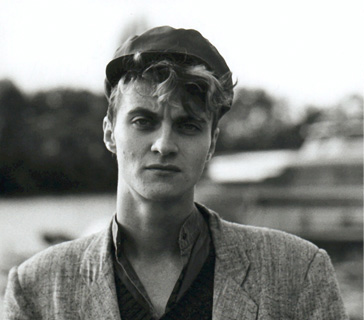 Ion Javelin was singer and co-songwriter of the german techno-cult-act from the late 80’s: Moskwa TV built bridges spanning from early techno – with great influence on the techno-/electro-scene at that time – to ambitious electro-pop; releases throughout Europe, the USA, South America and Canada, twice listed in the US-Billboard-Charts, 3 LPs, lots of singles and compilations. Further informations about Moskwa TV:

In the 90’s Javelin had been producing – besides numerous individual titles – 2 complete albums, one of them with keyboarder [a. o. Hired Help Band, Tokyo, T. T. D’Arby, Milli Vanilli] and renowned producer [Rob & Fab, Moskwa TV, Cantara, Jade] Volker Barber; however, both works haven’t been published by now, because at that time the major labels – inspite of their high esteem for the material – opined this kind of music wouldn’t be marketable in a big way during the highday of techno, house and hip hop [e. g. Michael Wolf, A&R Virgin (Germany): “If you had come along with that stuff some years ago, we would’ve snatched it out of your hands.“]. Javelin resigned a release in the independent segment, yet remained unfazed, kept on producing his style of music and occasionally also entered into cooperations, e. g. with Chandeen or Pascal FEOS.

Javelins perennial cooperation with Harald Löwy, songwriter of Chandeen, former label-head of Kalinkaland Records, induced the project Broken Surface; the concept-album – based on one of his literary essays and therefore produced exclusively in terms of artistic criteria – tells the coherent, expressionistic appearing story of a culture shock experienced by a stranger on his trip through N.Y.C.; almost continuous positive and euphoric critiques, abroad as well.
Afterwards: Collaborations with e.g. The Disco Boys and In strict Confidence (Chart-Entries).

To see former projects first click here here and then on the moons.